Meaning: 1. A cylindrical part of a building, usually situated on a corner of the main body. 2. A round, rotating part of a machine containing devices that point, e.g. a tank gun turret or camera lens turret. 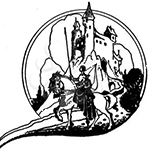 The only thing the two types of turrets share in common is roundness—if we accept hexagonality as a variant of roundness. A small turret is a turricle and turreted means "having a turret". In 1824 a reputable writer used turretry to refer to all turrets collectively.

In Play: Castles were popular for their turrets because guards could get a 360 degree view of the castle, covering all approaches: "Their pet rabbit had its own Château Lapin in their apartment, replete with turrets." In its other sense, a turret needs not only to be round, but it must be able to swivel, too: "The new tank was not only air conditioned, it had a soda fountain built into the turret."

Word History: Today's Good word originated in Old French as torete (Modern French touret "small tower"), the diminutive of tour "tower". Tour was the French remake of Latin turris "tower", a borrowing from Greek turris, tursis "tower". The trail seems to end here. It could be the case that Greek got its word from PIE tere-/tore- "rub, grind, turn (on a lathe)", source also of English turn, Latin tornus "lathe" and terere "to grind, rub (away)", French tourner "spin, turn, grind", Welsh taradr "auger". All these words imply making something round by rotating it. (Now let's take an e-bow to Margie Sved, one of our oldest contributors [since 2008], for recommending today's less obvious Good Word.)

P.S. - Register for the Daily Good Word E-Mail! - You can get our daily Good Word sent directly to you via e-mail in either HTML or Text format. Go to our Registration Page to sign up today!

Come visit our website at <http://www.alphadictionary.com> for more Good Words and other language resources!